Blog - Latest News
You are here: Home1 / Visual updates for wizards in Dynamics 365 Finance and Operations 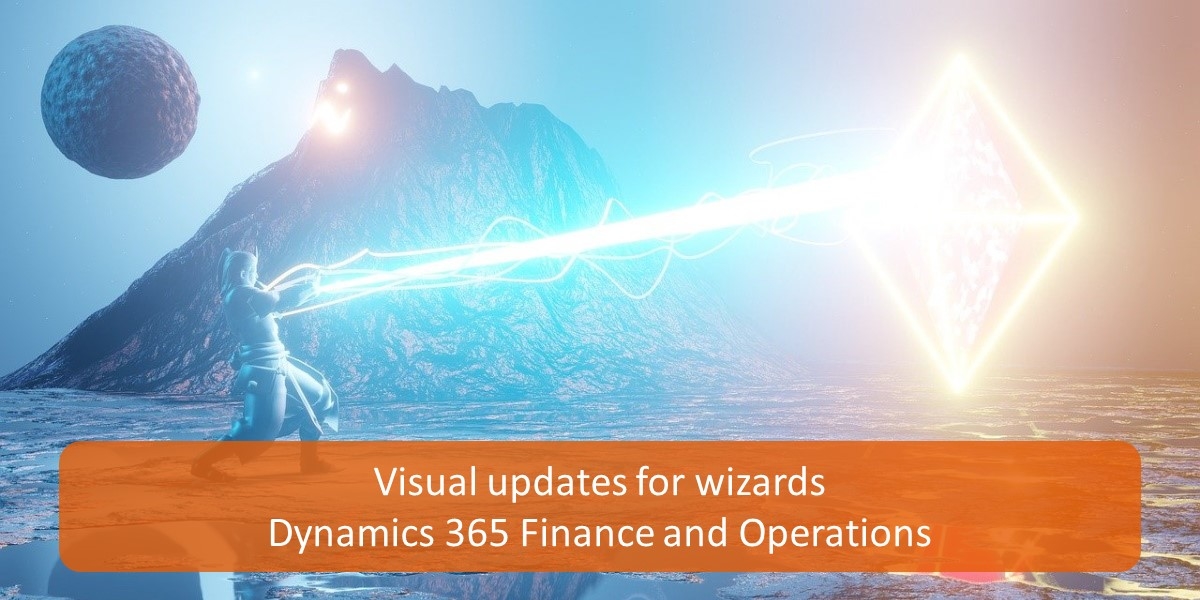 As part of the Microsoft Dynamics 365 2021 release wave 1 program, Microsoft announced several features. One of them is a Visual update for wizards which is restyling the wizard type forms in Dynamics 365 to align a similar look and feel with other Dynamics 365 apps. Apart from the user experience update, you should be aware of two minor topics when enabling this feature.

The wizards are not new in Dynamics 365. Already as of the first versions of Damgaard Axapta, wizards were used to help users with step-by-step instructions to complete certain tasks. The usage is limited to certain features only. The most familiar ones might be the Database log setup and the Number sequence wizard. There are a few more, like the Microsoft Outlook setup wizard. ISV’s, partners and customers were able to add new wizards.

Let’s have a look how the wizards looked like before in Microsoft Dynamics 365.

On the top of the form, there is a visual progress bar, indicating the current step highlighted with a color and the total number of steps (grey) to take before you can complete the wizard. Usually the wizard starts with explanatory text and a summary page at the end. So, out of the 4 steps in this example, there are two steps which needs data entry or input from the user. The summary page is for review before closing and completing the wizard. Using the buttons at the right-bottom, you can navigate to the other pages.

When moving to the next step, you will see the dark colored steps as completed, the current highlighted and the steps to be completed. Only the name of the current step is visible below the progress bar.

This look-and-feel is different compared to other Dynamics 365 products. For that reason, Microsoft decided to align and modernize the user experience for all wizards without the need for a developer to align customizations or ISV solutions to this new layout.

The feature for the Visual update for wizards has been released together with version 10.0.19. This is the minimum version where you will find the feature. You must enable the update in Feature management first. This particular feature will be enabled by default in April 2022 and is mandatory as of October 2022.

Depending on your version, you will find the feature on the All list page as the New list will only show the most recent feature additions. Click on Enable now at the right-bottom to enable the feature.

When the feature is enabled, and potentially the services, the wizard style is changed as visualized in the next screenshot.

It is noticeable that the steps are now presented vertically, supported with the names of the steps. So, first advantage is that a user can read what to expect during the several steps. It is also showing a checkmark in the completed steps which is also an improvement for the visualization. The content body is moved to the right and the buttons are now left-aligned with the content.

On other wizards like the one for Microsoft Outlook setup, you will see another change where field groups are now vertically placed on the form.

In the introduction, I mentioned that there are two things you should be aware of. The first was already mentioned above where enabling the feature will not be active directly; but after the restart. I will now also mention a second.

However, the new visualization looks more appealing, you have to realize that the width of the body is decreased due to the steps displayed at the left side. The progress part takes about 20% of the previous width of the body. When you have custom wizard forms as part of your implementation or ISV solution, it would be recommended to check if the resized body has impact on your particular wizard.

A comment was placed after I released this blog about missing fields when the new feature is enabled. In such case, you can disable the new visualization feature and report the issue to Microsoft. When you have custom wizards or extended existing ones, also check if all elements are visible.